Utter tells a story about the complexities of the mother/child relationship from the perspective of language acquisition in a performance with sound and film by Anne La Berge, Isabelle Vigier and Marcel Wierckx. The Interactive Slides App for the devices was developed by Mark Marijnissen.

Utter is also published as an audio-visual Story on the Unsounds website.

Link to a short trailer of Utter.

This is the score.

The text and the bulk of the audio for Utter was created at the Headlands Center for the Arts in northern California. The films and other visual content of the films were developed in February and March 2016 in Amsterdam.

There was a making of presentation of Utter on 26 March 2016 in Splendor Amsterdam where we have spent countless hours collaborating, playing and preparing.

We played the piece and then spent more time discussing the techniques, the background, the meaning, the difficulties and the effects of the performance than the actual time it took to play it. The discussion was engaging and inspiring for the makers and for the audience. It helped us all clarify what the piece was all about and what to consider for future changes.

There is an interview in Mexico City on YouTube.

These are the links to past performances of Utter:
Mexico
Mexico Plans
Splendor 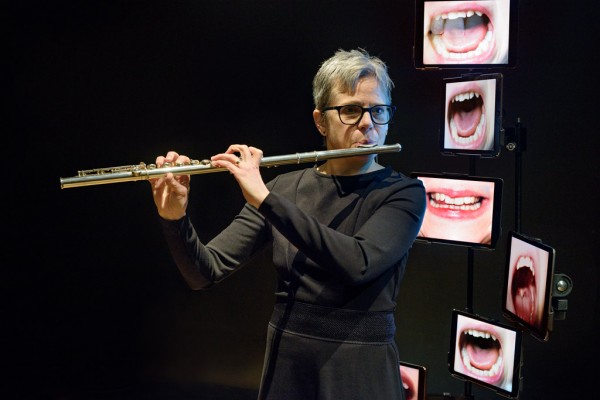 This project is funded by the Creative Industries Funds NL and the Performing Arts Fund NL.

23 February was spent testing the program, adding images and videos to the iPads and building the piece.

25 February. We found some snags and solved them for the most part.

20 March. The PR is out the door and into the ether.

24 March.
We are still working out the most elegant way to connect all the iPads to the laptop network. As it turns out, the Kyma System has to be turned off. I only had to call Marcel a couple of times to trouble shoot, or rather, remember how we had solved the issues the night before. Where would we be without teamwork?