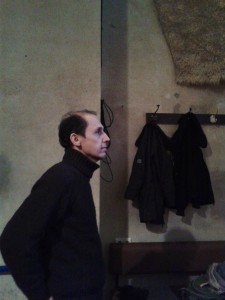 Guy de Bievre was one of the first artists I met when I moved to Amsterdam in 1989. He was living in Gent, Belgium and has since moved to Brussels. We have shared the stage many times in what Guy has lucidly referred to as experimental music.

I Gave My Tongue at the Office was a collaborative interactive sound installation built with Belgian audio artist Guy de Biévre. Long time collaborators, Anne La Berge and Guy De Bièvre created separately their own versions of a sound installation. The only two restrictions they had to take into account were a common technical platform and the fact that the sounds had to be associated with the human voice. Both installations consequently had to enter into a dialogue in a common room, controlled by a single microcontroller. 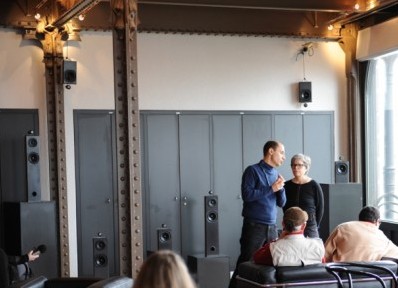 I am very sensitive to the colour of the voice, which I prefer to be silvery.
Paul Valéry, Cahiers

Did I tell you of the man I visited last week, who hasn’t lost the ability To move his tongue, his lips, to laugh or cry or sing or use his voice, yet is unable To utter any words, just a few unintelligible syllables, . .
Laurie Sheck, No Summer as Yet