LonelyStats was inspired by the career and talents of Annabelle Lefty Lee, an American baseball player who was the first in the Women’s League history to throw a perfect game using a knuckleball pitch.

While many women were joining America’s work force during World War II, Annabelle “Lefty” Lee took to the pitcher’s mound and made history as a star in the All-American Girls Professional Baseball League. The Girls League was meant to maintain baseball in the public eye in the Midwest at a time when many of baseball’s male players were in military service.

In 1943, more than 300 women traveled to Chicago to try out for 64 positions on four baseball league teams. Between 1944 and 1950, Annabelle made history. She pitched the league’s first perfect game in 1944 and then a no-hitter the next year. Her specialty was the knuckleball. A knuckleball is a baseball pitch thrown so as to minimize the spin of the ball in flight, causing an erratic, unpredictable motion. This makes the pitch difficult for batters to hit, but also difficult for pitchers to control and catchers to catch. In the official list of knuckleball pitchers in baseball, Annabelle’s name is not to be found.

LonelyStats was commissioned in 2012 by Field Of Ears as part of the ‘Night Witches’ program in the Orgelpark in Amsterdam.

It was fully funded by the Performing Arts Fund NL.

The score is a Max App that receives triggers from the improvising musicians which randomly change who is playing. It also suggests musical parameters for each player. 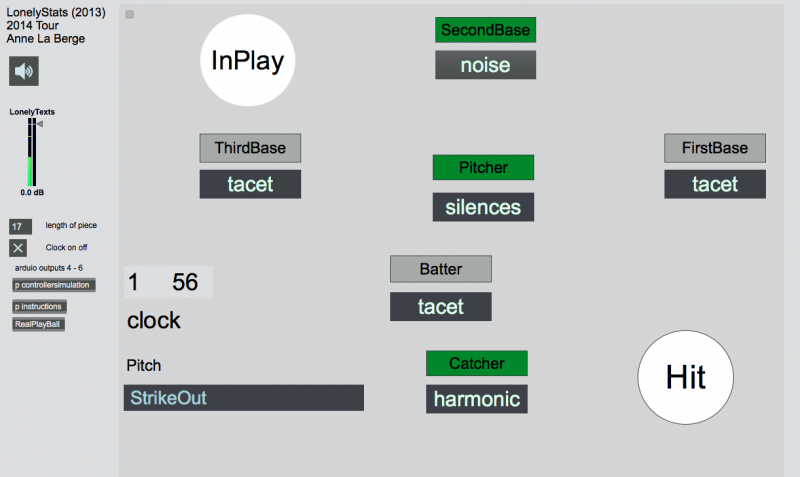